I will have to consider going back and changing how I draw the keep.

Posted by Justin at 9:57 AM No comments:

I got just shy of 5k hits in a day, and not one troll talked about how my my comic sucked. So I consider that an Internet Win.

It got me interested in what life would be like if I was able to make a living off of just drawing comics instead of being an old IT guy. I'm going to try to expand some of my on-line presence and see if that draws more people to my comic, and ultimately to my patreon page so I can start to try to make enough money off the comic so I can draw full time.

OOh this will be a lot of work: I have a line on getting published, if only I can get that comic finished, and it's not the D&D comic I so want to draw. Just letting the nobody who follows this blog know that I'm still here.

Yesterday, upon the stair, I met a man who wasn’t there He wasn’t there again today I wish, I wish he’d go away...

Posted by Justin at 2:11 PM No comments:

Still posting as often as I can. I think that I'm not going to live long enough to draw all the comics I want to. Other then all the obvious ways winning the lottery would be awesome, I think it would be fun to write the comics telling the stories I want to tell, then pay people to draw them for me.

I guess that's how people start comic companies, but I really hate marketing and selling things. When I think about running a business and having things like employees, I get the dry heaves. So no... starting a comic company isn't a good option for me. If there's no lotto win, what I need then is a gullible wealthy person to give me mad stacks of cash to get my comics made, then I can just make them all, and HE (or SHE, I'm not picky) can take all these comics and do what he wants with them as long as I get a copy. NO idea how to pull that one off either, since I kinda need to eat and pay bills, there's this job thing getting in the way of everything.

I have further adventures planned after the Keep on the Borderlands story, mostly running through different adventures in the OD&D adventure path. In addition to that, I have ideas such as:

And a few others too nebulous to mention.

Good luck with 2017 out there everyone! It's going to be a harrowing year!
Posted by Justin at 2:26 PM No comments:

The Keep the Borderlands Comic

I have about 150 pages of this comic penciled in my notebook. Since I'm posting at least once or twice a week, I have months of buffer. Furthermore, I roll up fight scenes when I have the time, and write out scenes and conversations between characters as I think of them. Therefore I have an additional 200+ pages of script in a binder waiting to be drawn, which by my estimation would lead up to about 500 more pages of art at least. The characters are still at the Caves of Chaos, have completely disrupted the region, destabilized the politics of the Keep, wiped out a few caves, picked up new party members, and several PCs have died.

D&D characters die all the time. I'm being honest in my combat rolls and sometimes a string of ones doom the whole party. It's hard to get a party out of the level one doldrums. The part that makes me ache is I have to draw these guys for years still, knowing the future and knowing that in that future, several of these guys will be dead. It's a little rough to do. I have future plans for all the characters and when one kicks, it takes time for me to adjust the story to accommodate. How are the party's alliances changed? Who bails? Who sticks around? How do the deaths of companions effect the desires of the survivors? Do they get bitter? Is their resolve strengthened? Anyway, it's going to be interesting to see what happens if readers fall in love with these guys like I have, and then see what they do when the characters get killed in an anticlimactic fashion in the middle of a dungeon. I'm not going to say who kicks until it happens, just know.. no character is safe.

Posted by Justin at 2:19 PM No comments:

I'm going to continue the adventures here: But I'm posting once a week there and going through what I have already posted, so I have a buffer to try to keep to a weekly schedule.
Posted by Justin at 5:54 PM No comments: 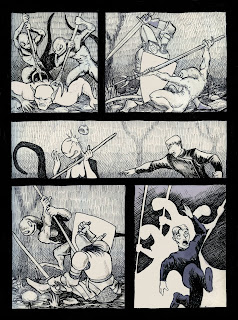 The Other Party fights off the Lizard men. It doesn't look like they are doing very well.

One of the Bad Guys 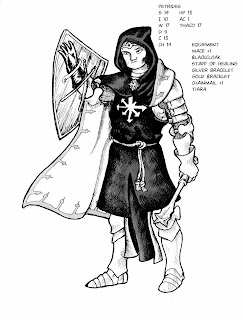 This is one of the bad guys the Party will eventually deal with. If they can just figure out how to survive from moment to moment.

Posted by Justin at 6:43 PM No comments: